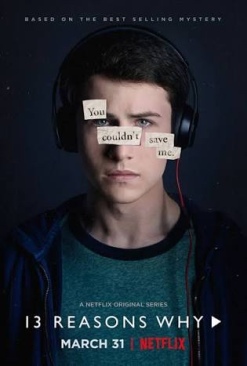 Like most of you, I’ve watched “13 Reasons Why” on Netflix. There’s one particular scene that made me think a lot, and probably made you think a lot. So I thought, maybe, we should talk about it. (SPOILERS ARE INVOLVED)

It took me 5 days to watch all of “13 Reasons Why”. (I know, I’m slow…) For those who still haven’t seen it, it’s the story of Hannah Baker, a teenager that took her own life and left 13 tapes explaining why she killed herself. In those episodes, we’re confronted with different aspects that are still real issues in teenager’s life such as bullying, slut shaming, rape and depression.

It’s a story that I think was much needed because it takes those issues in a deeper angle than the ones we’re comfortable with. And one scene particularly hit me more than others and it has been a controversy all over the media. I’m not talking about the rape scenes although they were heavy. I’m talking about Hannah’s suicide.

The last tape, Hannah wanted to find some hope and gave herself a last chance before committing suicide. She decided to go talk to the school councilor about Bryce, the ultimate jock/asshole, raping her but it didn’t go anywhere. So she went to her parents store and stole some razor blades. Then she went home, got in her bath, cut her wrists and let herself die. And you get to see all of it, uncensored.

I had a hard time watching that scene and had to press pause before going all the way through. For a second, I thought about skipping it and then I realized the point of the scene and why the producers decided to let it in. So I watched it without blinking once.

Personally, I’ve never felt suicidal. Therefore, I can’t judge those who were cause I don’t know the feeling. I’ve heard of people committing or attempting suicide. So when I heard about the family and friends they were willing to leave behind, my initial thought was “How can a person be that selfish?” Seeing Hannah willingly severely hurting herself, giving herself such a painful death changed that question to “How much pain can a person be in, internally, that makes suicide possible?”

Although survival instinct isn’t a 100% proven fact, it’s still real in some situations. When a car is about to crash, apparently, our instinct is to put our hands forward to not get hit by a wall. When we’re drowning, our instinct is to swim back up for air. But how come people are capable of losing that ? In my opinion, the logic answer, is that something is seriously broken in some way. Something much more painful than death. Being selfish cannot possibly be the only reason that can lead anyone to their own death. Not even stupidity. I think those persons are in real pain. And if we don’t talk about it in that sense. If we don’t look for all the signs. If we don’t listen to one another, we will never get to the bottom of this.

One thought on “13 Reasons Why : Real talk about suicide”

By the end of the week, the goal is to feel as confident and sexy as the ultimate MOTOMAMI. And for that, the song is “La Combi Versace” by Rosalía.
This song is a throwback Thursday for sure. That song was reprised by Brie Larson when she portrayed Envy Adams in the underappreciated movie "Scott Pilgrim vs. the World". I might do a rewacth...
My beautiful Swedish princess. Nothing to say more on that. Wednesday deserves a fun song and that's what it is.