On Friday 8th June, Netflix aired the two hours long finale of Sense8. Although it was only two seasons, it was to me one of the most beautiful thing I’ve ever witnessed. Let me try to convince those who still haven’t watched to see it.

Today, we live in very self aware period where we wonder if we truly made advancement in regard of equality of the sexes, where being homophobic is finally seen as a bad thing (a ridiculous term since no one is honestly scared of homosexuals). One where people are trying to fight Islam although it’s the wrong battle, but thankfully some people are aware of that. Maybe it’s always been that way but I feel like that we’re in an era where people that are on my side of this constant big humanity fight are those who believe that anyone can be whoever they want to be and that’s ok, as long as they are being truthful to themselves.

This is exactly what Sense8 is about. It revolves around eight characters who are supposed to be the next evolution Homo Sapiens Sapiens. They all have different stories and lives but are connected. The connection is a little bit hard to comprehend at first, but as part of the group (called a Cluster), they all have access to all of the others ability and knowledge. Basically they are like one person separated in eight or eight person assembled in one. More of the latter than the first.

Created by Wachowski sisters, they wanted to connected the world together by connecting people from different side of it: We have Nomi, a hacker and transgender woman from San Francisco, Will, a cop from Chicago, Lito, an actor from Mexico (who happens to be gay), Capheus, a bus driver from Nairobi, Kenya. Riley, an Islander DJ who lives in London, Wolfgang, a criminal from Berlin, Germany, Kala, a scientist from Bombay, India and Sun, a business woman and kickboxing badass from Seoul, South Korea. To do justice to all those countries, they tried to cast people from there (exceptions are made of course), and most importantly, they shot their scenes in those countries. The result is absolutely gorgeous, but costly, hence the cancellation of the show.

Through their different sensate-ish interaction,  we can see that, somehow, they all feel the same things but in a different way. And because of that special bond, they have this ability to understand one another, and if not understand, empathize with them. This type of empathy is exactly what we, Homo Sapiens Sapiens don’t seem to have nor understand. And because we feel threatened by things we don’t understand or things we don’t feel, we have this tendencies of rejecting it as if it was bad. What does that translate into ? racism, homophobia, hate in general and war. The logic behind the connection of sensates goes in the total opposition of that thinking. And I believe that’s why some people I know have a hard time watching the show, or understanding it, because it goes against something imprinted deeply in their psyche. (Yep I got deep on this one).

There’s something absolutely beautiful and freeing about accepting people the way they are and embracing the differences their could be in everyone. No matter how the person in front identify as, believes in, we can always find a common ground when we look at something that makes us the same instead of what makes us different. 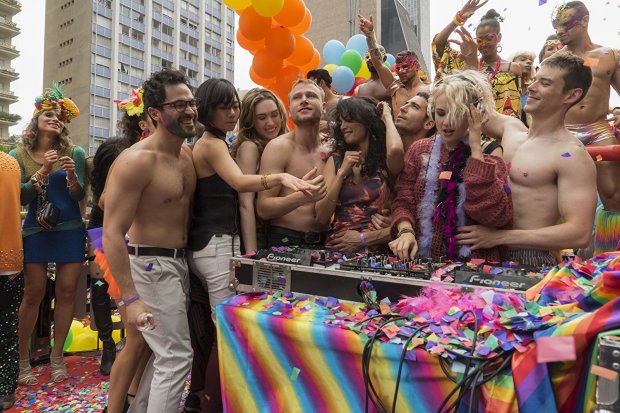 Like the title of the last episode says “Amor vincit omnia”, love conquers all. Love is stronger. Love is love. Simple like that.